Housed on the Marcus Fairgrounds since 2004, the Mt. Pleasant

Church is a wonderful focal point of local history.  Available for

rent year around, the church basement has a small kitchen and a

large seating area.  The church itself is fully restored with a wealth

of history inside for a visitor to peruse and if you please, can be

rented for weddings and services.  The church is used year around

The Mt. Pleasant Presbyterian Church was started in 1891 and was located in rural Marcus in Tilden Township at 603 590th St.  The congregation voted to close the church in 2003 and in 2004 the church was donated and moved to the Marcus Fairgrounds.  The previous location of the church was donated to Pheasants Forever and has since been taken over by the Cherokee County Conservation Board as a wildlife preserve area.  Below is a brief history and excerpt taken from the 100th anniversary publication by the church "Memories and Visions."

Mount Pleasant Presbyterian Church of Tilden Township, in the County of Cherokee, and State of Iowa, was established on an acre of land donated by John Williams two miles east of the Fielding store.  The church was adjacent to the Tilden #7 school where services were held before its construction.  The roads then were dirt trails and had no ditches.  They were maintained by the farmers pulling a drag with horses.  It was called their poll tax.  Gravel was added to the roads in the late 1930's.  The church was many miles from any town which was one reason for its establishment.

On September 3, 1891, a meeting was held at the United Presbyterian Church in Quimby with Rev. John McAllister of the First Presbyterian Church of Cherokee serving as moderator.  The purpose of this meeting was to organize a church in Tilden Township which became Mount Pleasant Church as this was the name of the cemetery a short distance north of the church site.  The charter members were:  Mrs. Mary Coburn, Mr. and Mrs. Peter MacIndoe, Mr. R.S. Wilcox, Mrs. Martha Wilcox, Mrs. Eugene Wilcox, Mrs. Eliza Keith, Janet MacIndoe, Mrs. Joe Bierman and Mrs. Lizzie Brooks.  The first elder was Peter MacIndoe and the first trustees were Thomas Boothby, John C. Montagne and Peter MacIndoe.  The Rev. Leonard M. beebe, who came from Williams, Iowa, was the first minister.

Money for the erection of the building was raised by the subscriptions of friends and a loan of $500 from the Board of the Church Erection Fund of the General Assembly of the Presbyterian Church of the United States of America.  The note was signed on January 20, 1892 by P. MacIndoe, President of the Board of Trustees.  This was a non-interest bearing loan.  The cost of the church was $2, 250.  Amity Brooks was the man who mounted the church bell at the cost of $137.80.  The church was completed and dedicated on January 1, 1892 with the cost paid in full.  The Rev. T.S. Bailey, Executive of the Synod, preached the sermon that day.

During the pastorate of Rev. J.B. Cameron, 1898-1902, the manse was built.  Lightning hit the church building in 1917 rendering it unusable.  This was the beginning of World War I.  Services were again held in the school building.  After a survey was made by the Rev. Thomas Scotton, a Sunday School Missionary, he made a favorable report that the people wanted the church to be reopened.  The church building was again in use by 1921.

Rev. William Jones, minister at Cleghorn, was called to be our pastor, and we yoked with the Cleghorn Presbyterian Church.  At that time, we paid 40% of the pastor's wages and they paid 60% along with furnishing the manse.  The manse at Mt. Pleasant was sold for $650 to a farmer.

In 1922, the church was remodeled with a full basement, kitchen, furnace, rain water pump from a cistern and a Delco light plant under the basement steps.  This work was done by the members and their friends with some labor hired.  In 1948, new windows were installed throughout the church replacing the white-frosted ones.  In 1950, a kitchen was added to the north end of the basement with two Sunday School rooms above it at the cost of $3,000.  The old kitchen then became the furnace room.  By then we had electricity from R.E.A. and a shallow well in the school yard.  We had water in the kitchen and later a restroom in the basement.

The loan of $500 was repaid in full to the Board of Church Erection in 1955.  We had a "Burning of the Mortgage" service then when Rev. Gysbert J. Ver Steeg was pastor.  The school was closed in 1950 and we became the owners of that land too.  We sold the school building and it was moved in 1965.

In 1963, the kitchen was further improved with new floor covering, cabinets and sinks.  A new entry to the basement was built replacing the cellar door that children used for a slide.  In 1964, the Student Loan Fund was established.  This fund is for members of the church who want to take additional schooling after high school.  In 1988, the interior of the church was repainted and recarpeted.

Improvements that have been made are steel siding, combination storm windows, new front doors, a cross erected on the steeple, cupboards in the Sunday school rooms, carpet in the sanctuary and basement, new pews, piano and organ and many trees.  The First Presbyterian Church of Cherokee gave us their pulpit, chairs and communion table which we presently use.  We still have the original pulpit, chairs and table.

In summary, each of us are thankful that our ancestors had the foresight to provide a church where we can raise our children as Christians.  As a historian of Cherokee County wrote some years ago about our church, " The little church has done very helpful work...it has contributed to churches elsewhere.  May God continue to greatly use those who have left its bounds and those who remain."

"When I come out to the church on Sunday morning, I cannot see the church until I go over the last hill.  I'm struck practically every Sunday by the beautiful church building nestled among the fields.  In winter, the church almost looks like a Christmas card and in any season, the church stands like a beacon of faith.  A lot of Sundays, I have a few minutes alone in the church and I often find myself wondering about those who went before us.  I wonder about the first members of the church and how it was a struggle for them to gather in the middle of a snow storm.  I wonder about the pastors who have gone before me and what a ministry was  like for them without all the conveniences we have now.  My prayer is that Mt. Pleasant continues to be a place where the faithful can gather to share in their faith, where each new generation can learn the stories of our faith and the stories about Mt. Pleasant." -- Rev. Ann Rouse, pastor Sept. 1 1987-1995

A Piece of History 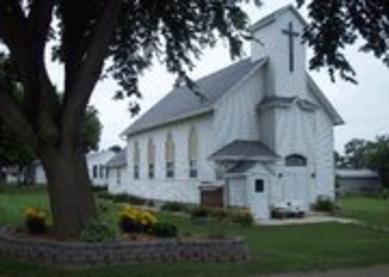